shut up and sing 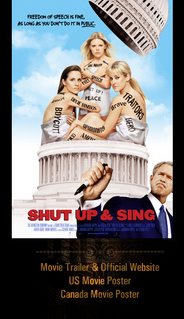 Just came back from the movie "Shut Up and Sing" about the Dixie Chicks and their crash after Natalie Maines proclaimed they were ashamed Bush was from Texas during a London concert. (sorry, I'm the run-on queen... also the queen of parentheses!)

LOVED IT.
Of course I would, though. I love the Chicks and will always. There is no doubt that it is a promotional piece for their big comeback but... (oh and I am also the queen of ellipses) it is also their chance to say what they want unabashedly.

It did make me want to see them live and to get their new album (of course I won't be *buying* the album and I couldn't afford to see them live at GM place last night... next time). But I did go see their flick ;)

There were a few times when band members would whine about the *possible* eventuality of not being able to keep up their lifestyles and it was difficult to feel sorry for them seeing that I will never be in their shoes... but having said that, I am sure I would be whining every bit as much and possibly more if I WERE in their shoes (or boots).

This film was only playing in one theatre in all of the Lower Mainland: 5th Ave Cinemas. 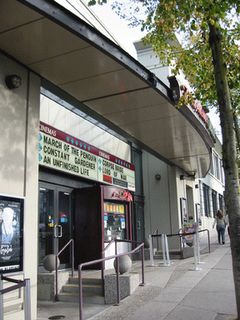 This turned out to be a gem!
It reminded me of a few theatres in Toronto that I loved to go to. This is where I'll find the indie and rep films in Vancouver. There is a membership so you can get a discout if you support them for $12/year. They also sell reasonably priced treats including white popcorn (not the yellow stuff in typical theatres) and they have real butter... none of the chemical "topping" or margarine that I avoid elsewhere. They also sell organic fruit, sandwhiches, nuts and other stuff. The seating was comfortable and there are balconies!
Fabuloso.

Hey and in other news... Greg hasn't smoked in 5 whole days!!! He is a real trooper. We went to Bodyworlds last Friday and after seeing smoker's lungs compared to healthy lungs he got all freaked out and quit. He bought himself a nice bike to help with his new healthy lifestyle :)

Looks like you are a "City" person thru and thru. You already found some of the "Art scene". Did you know there is an "Art walk" in the Downtown Core? Yep real neat. If you want a cultural treat go to Metrotown Mall but enter the Hotel on the Willingdon side of the Mall. I think it's a Hilton. You'll find a cool Chinese mall inside. Clive

Yo Momma is glad your here!!

Send my congratulations to greg on choosing a healthier lifestyle. :)