I like to be a know-it-all (much to everyone's enjoyment) so I return to my long lost blog to post about food trivia.
Are you excited?

Years ago when I was living in St. John's Newfoundland I had a roommate from Vancouver. She kept calling Sweet Potatoes by the name of Yam. I informed her that she was calling it the wrong thing... I know, I am super fun to be around... I told her that the orange-fleshed vegetable was called the Sweet Potato and the pale yellow-fleshed vegetable was the Yam. I even went to the extent to look them up in our "Vegetable Encyclopedia".  For further proof, search for "sweet potato" on Google Images. 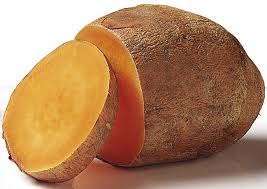 Apparently this is common in various parts of North America though the USDA requires them to be labeled as both a Yam and a Sweet Potato but apparently that doesn't happen here in Canada.

According to my sources (more than just Wikipedia, I swear!), the orange-fleshed tuber is an Ipomoea batatas and the pale-fleshed tuber is in the genus Dioscorea. The Ipomoea batatas is from South America and the Dioscorea is from Africa which is where the word Yam also gets its origin - njam, nyami, or djambi, meaning "to eat". This is also speculated to be where the confusion comes from. When African people were brought to North America as slaves they called Sweet Potatoes by the African names for Yam... being that there would not have been any true Yams in the country at the time this would have made sense.

Here is an image of a true Yam:

So there you have it - the story behind the Yams & Sweet Potatoes. Call them what you want but just don't call them late to dinner (bah!).

uhhh, yeahh, they call them in Ontario (at least in Toronto) yam as well. Seems like Torontonian's never heard of "sweet potatoes!"
o.

Yeah I discovered the same thing about Prawns and Shrimp. On the east coast its shrimp and baby shrimp but on the west coast its prawns and shrimp. Apparently they are both right. A prawn is a shrimp!