Celebrities in the Long Tail

I know that celebrities are just people, some of who actually grew up with a similar lifestyle to my own - and they all have to poop which really brings us all to the same level. But some celebrities affect us more than others and what I think it comes down to is how much you admire them and their work.

Before I dig into this blog post I should give a brief explanation of the Long Tail. Back in 2004 Chris Anderson pointed out in Wired magazine that:

The theory of the Long Tail is that our culture and economy is increasingly shifting away from a focus on a relatively small number of "hits" (mainstream products and markets) at the head of the demand curve and toward a huge number of niches in the tail. ~ Chris Anderson's Blog

This means that more people are making a bit of money rather than a few people making a lot of money. Thanks to the Internet and accessible production technology, independent content creators have a publishing and distribution vehicle without having to be "discovered" by large production companies. Apple took this one step further in creating iTunes, the App store and the iBook store - now independent musicians/digital story tellers/authors can monetize their content by selling it directly to consumers rather than hoping for advertising dollars.

That is a very simplified summary which will do just fine for me to carry on with the heart of this post...

So the Long Tail consists of a lot of independent digital storytellers who are reaching a niche audience specific to the stories they are telling. For example, there are a few great pocket-knife reviewers on YouTube and Greg is enamored with them. The audience for people who will watch pocket-knife reviews is small compared to the audience watching prime-time television so these reviewers are part of the Long Tail and Greg is part of their niche audience.

Anyway, I have recently interacted with TWO niche celebrities that I admire, which bubbled me up like a glass of Prosecco. It got me thinking about what it is that makes people starstruck. I have met celebrities before... kind of big ones too... and it is always a little weird unless you can have an authentic connection with them. What do you say to someone you just met when you know so much about them and they know nothing about you... nor do they care to know anything about you. With a celebrity from the Long Tail there usually is a common interest you share which is what the niche is all about.

To illustrate, here are my Long Tail celebrity experiences:

@DaisyWhitney - author of a great teen novel,The Mockingbird's, and New Media journalist. I have been listening to her on the podcast This Week In Media as well as watching her New Media Minute video podcast series for a few years now - and following her on Twitter. She had been promoting her book debut for awhile so when it was my turn to host book club, I asked the gals to read it. I tweeted @DaisyWhitney to let her know and SHE RESPONDED! She said she would answer questions about the book for our book club via e-mail! When I sent the questions, she sent us a VIDEO RESPONSE! So cool! So very very cool!


What is really cool about celebrities in the Long Tail is that although they are busy and still have thousands of fans, they actually can take some time to respond to fans in an authentic and meaningful way. I feel like we are friends now (don't worry, I'm not crazy stalker grrl) and that is the best possible outcome for a fan... to feel like there is a real connection with the one they admire.


@FeliciaDay - writer/actor/producer of The Guild and actress in Dr. Horrible among other things, is my latest target (srsly, I'm not a stalker grrl!). The Guild has a HUGE cult (aka niche) following and I am among its fans so when I tweeted @FeliciaDay about not being able to watch the latest season, SHE RESPONDED! Very cool.
Here are some of the not-so-niche celebrity moments I have experienced...

Sarah McLachlan -  probably the most popular and world renowned star that I have met. For me it was one of the most awkward of celebrity meetings. I was invited to an after-concert reception "back stage" where she was obligated to socialize with sponsor big-wigs and such. Myself and another colleague were eager to meet her (I wanted her to sign an insert to a concert DVD to send to one of my best pals) so we basically hovered nearby until we had our opportunity. It was very clear that we were low on her management's priority list and that we only had a few seconds to talk to her. She looked exhausted and I felt embarrassed that I was just another person on a long list of people who want something from her.

Nothing meaningful was exchanged; the interaction was all one-sided and she will never remember me. It was an empty meeting for both of us. 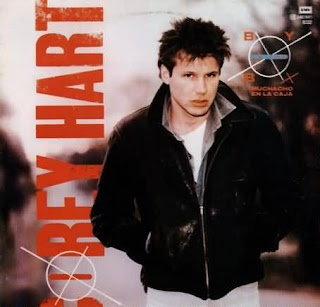 Corey Hart - the BEST celebrity experience I have EVER had. He was my childhood crush - the pop-star that I dreamed of dating and perhaps even marrying one day! One of my best friends and I met and bonded because of our mutual love for Corey Hart <3. She and I even went to a concert of his when we were in our mid-20's to relive that crush from our youth. So, when I was in Toronto and working on the SOCAN Awards Gala and found out that he would probably be in attendance I called that best friend and she flew in for the weekend (5 mts pregnant!) on the off-chance that we ~might~ get to meet our childhood sweet-heart.

So there we were, dressed all fancy waiting for the Gala to start, watching a small press-conference where Corey Hart, Tom Cochrane, Glenn Lewis, Sam Roberts and -I-can't-remember-who-else were being interviewed about something SOCAN related. There were only about 50 people in the room and when the press conference was over I spotted Corey standing all by himself. I had one of those moments where I said to myself "if I don't go up to him now, I never will..." so I nervously walked right up to him and stretched out my shaking hand and said, "Hi, I am Christina and I am a HUGE fan of yours...". He smiled down at me (oh shiver!) and then my best bud was there shaking his hand... then we told him our story about how we met because we were into him when we were 12. He was SO NICE! He talked to us for a good 15 minutes and it was easy, casual, fun... we could have been at a house party just having a chat!

He happily signed all of the items we presented him with and then we left feeling pretty much like giggly school girls. About 3 minutes later we realized we had forgotten to get a picture WITH him so we ran back to find him talking to just one other guy - phew! When we walked up to him he said to his friend, "Oh these are the girls I was telling you about..." (HE WAS TALKING ABOUT US TO HIS FRIEND!!!) so we got our photo and I knew that nothing would ever top that celebrity experience.

How many people get to meet their childhood pop-star crush?! Not many, I'd say.