The year 2011 has been an incredibly strange roller coaster for me – and the rest of the world, it seems.

Of course recently the death of a technological and corporate icon Steve Jobs had a huge impact on the world. At one point I noticed 7 out of 10 Twitter trending topics had to do with Apple and Steve Jobs.

I have heard some people call him this era's Thomas Edison and others chastise him for exploiting the environment and people's psyches for his own capital gain. There is truth from all perspectives. To me, he truly was a culture changer – the iPod came out only 10 years ago, the iPhone less than 5! Although he may not have literally done the engineering for each of these paradigm shifting gadgets, he lead the development of everything about Apple products. That is pretty darn impressive.

The socialist inside of me does rage against corporations who don't consider our environment as part of their bottom line. There is also an element of elitism built into the Apple brand that is frustrating... advertisements preying on our need to belong and exclude others (I'm a mac, you're a pc). I have fallen for that time and again and pull myself out only to get swept back into it.

However the greatest achievement of Steve Jobs was to put the power of mass communication into the palms of billions of people. Being able to access mass Internet social messaging via a portable device is remarkable and absolutely world changing. I realize Apple was not the only company to build a mobile device that accesses the Internet, but Apple pushed the boundaries and drove the world market. This is what enabled countries like Egypt, Yemen and Syria to share information, rally people together to revolutionize their governments. Communication is always at the heart of revolutions.

I hope that Apple will continue to nurture culture changing creators. The future will show us if Mr. Jobs created a legacy organization or simply took advantage of his time while he was with us. This retrospective shows how Steve Jobs became an icon through his keynote deliveries at Apple's annual World Wide Developers Conferences:

The iPhone was first launched in 2007 and was available in Canada with the iPhone 3 back in 2008. My life was altered in such a positive way... and still 3 years later I feel the same about this incredible device.

Here is what I love about the iPhone:
I have used other smartphones... my mom has a Samsung that runs Android. It just does not work as well and is not as user-friendly as my darling iPhone. Soooooooooooo... having reached my 3 year contract cycle end with Rogers, I decided to get the new iPhone 4S, squeeeeeeeee!!

The features of the new iPhone compared to my iPhone 3 are just outstanding – I can turn my phone into a wireless device so my iPad or laptop can use cellular Internet when no other wifi is available; it takes HD video and has a waaaaaaaaay better camera and of course now there is Siri. The line-up was an experience unto itself which you can follow through my twitter history for Oct 14th here:

(Select Oct 14th from drop down...)
(If that doesn't work, you can go to my twitter profile OR check out the snapshots below.)

Now the socialist in me will check out Occupy Vancouver because people like me are also part of the 99% (and Steve Jobs was definitely part of the 1%). 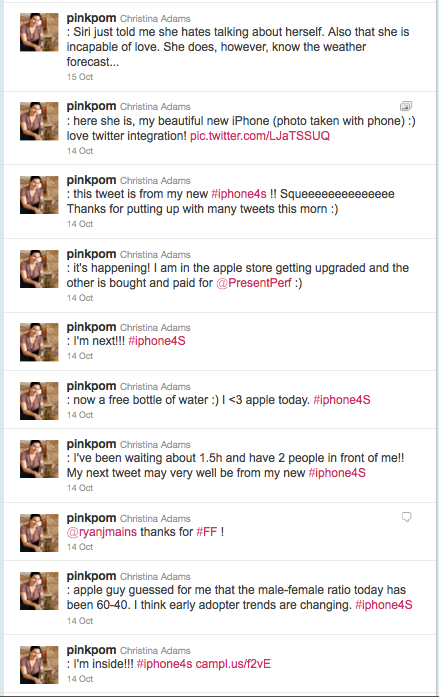 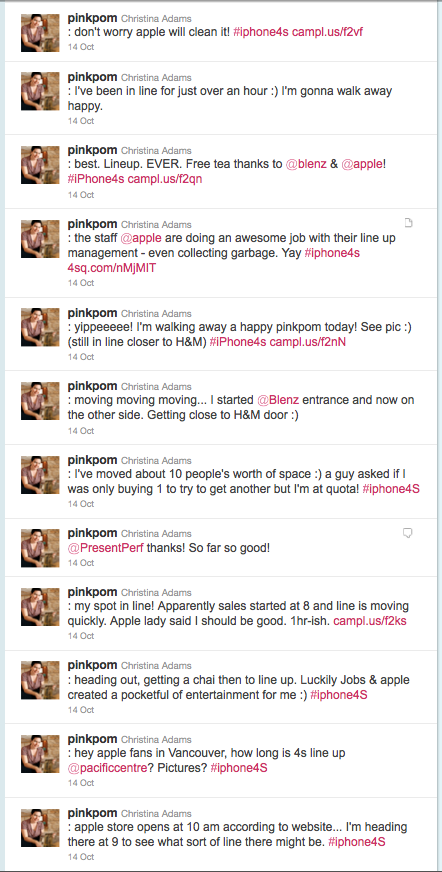 First, the dealer will place a card face up and then split the deck into two piles. One of the most popular card games in India, Teen Patti has now been up to date for the digital age. In this sport, all 바카라사이트 players begin by putting the same stake into the pot of cash. Everyone is then dealt three cards, and each player should resolve whether to call or increase the stakes. Love classic desk games but need something completely different? Fire up a sport of Lightning Dice, learn to play Sic Bo or spin the wheel with an unforgettable sport of Dream Catcher.